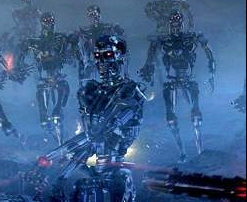 he said, at the time of the interview, that such implants could be developed within 10 years.

A lot of what’s coming is already here as well.

Look up Project Maven, which is basically Skynet/ Killer AI robots designed for the military that is already HERE.

What this does is it will allow military fighting without people being involved;

DARPA for years have been developing “neuromorphic chips” aka BRAIN chips that mimic the human cortex. These chips will allow robots to learn and do stuff; backflips, dance, push ups…

But also military stuff like use power tools, drive a jeep while shooting guns, etc.

All this really does sound like a movie (Terminator),

But knowledge/technology is exponentially increasing and you’ll see many applications:

3D hologram technology + AI; can create any image of anyone at any age. It’s very realistic:

Who is the False Prophet (Revelation 4:8)

He appears like a harmless, religious leader but he literally speaks for the @

The false prophet will also use some kind of image to represent the Anti-Christ. And if people don’t worship this image, they will be put to death.

How will the false prophet do this?

He may perhaps take advantage of hologram technology to do this on a mass scale.