Give a date for when this will happen. Otherwise, we can safely ignore you.Hi @Subteigh,

I wish I could give dates, but I honestly don’t know.

So many events / variations could happen, delaying things or so

It really depends on Israel.

If the Gog / Magog War breaks out and Damascus is destroyed, the Tribulation should shortly follow.

This is where this guy comes in:

Han Solo is a good guy so I probably should have used something like this instead:

-Birth place is from the mediterranean area (Revelation 13:1)
–Syrian Jew (Daniel 11:2-37)
-Religious affiliation is Roman Catholicism
-He will speak English, represented as the mouth of a LION
-His feet is like a BEAR or moves like a socialist country
-Main connection is LEOPARD, united states of americaThe Anti-Christ will help sign a peace treaty covenant between Israel/Jews and Muslims (Start of the Tribulation Period and rebuilding of the Temple), but later betray the Jews in the middle of the Tribulation.

The Book of Daniel was wrong about its own times, never mind our own. And it certainly has no prophecies for our time.

The passage you quoted, Daniel 11:1 (“Also in the first year of Darius the Mede, I, even I, stood up to confirm and strengthen him.)), mentions nothing of what you say.Sorry @Subteigh that was a lazy break down with errors. Here’s a better one:

Here it talks about where the Anti-Christ is born

Throughout Revelation, main geographical location is Israel, this sea that is mentioned is most likely the Mediterranean sea,

A Beast shall rise up out of this Sea (Anti-Christ)

Here in this chapter, there is a historical (Alexander the Great) and future reference (Foreshadowing of Anti-Christ)

Verse 14,15; King of South conflicts with King of North (Egypt vs Syria)

Verse 21; someone is going to take over King of North thousands of years later and “Will come in peace”(Anti-Christ)

Verse 37; “He denies the true God of his forefathers”(this is a Jewish thing)

@peteronfireee2 The Number of the Beast most likely referred to the Emperor Nero, based on other indications in the text as well as the knowledge there was a widespread belief for many decades that Nero would return (after his death).

Yeah, some of the popular targets have been “Caesar Nero,” “Ronald Wilson Reagan,” “Mikhail Gorbachev,” and various popes in Roman Catholic history. The lengths some will go to in order to get a person’s name to add up to 666 are amazing. Virtually any name can add up to 666 if enough mathematical gymnastics are employed.

The author was referring to their own time, and Nero in particular. When they say Rome, they mean Rome (the Roman Empire) who conquered and sacked Jerusalem in AD 70. There isn’t too much to interpret – the book was written after this, and in that context.@Subteigh Incorrect

Again, Revelation is a book of prophecy. Prophecy has a double application; (timeline#1 + timeline #2)

In the book of Psalms, David saying “My God my God why have you forsaken me;” references to King David’s SIN (timeline #1) AND Jesus on the cross in the future (timelines #2)

the book was written after this, and in that context.You need to update your context to the correct one.

Here’s the general context of Revelation to help you out: 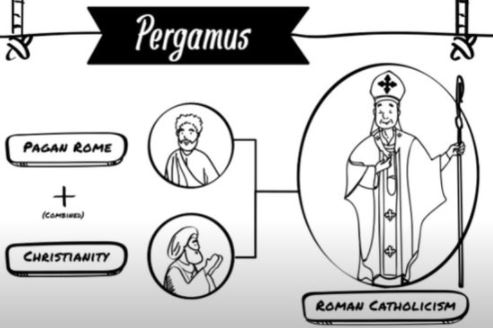 The author/s called Jesus the morning star, even though Isaiah gives that title to Lucifer. Who is wrong? Maybe both?Prophecy and Double Application@Subteigh this is not for you

What do you mean by a prophetic book?Lol. This is what happens when RationalWiki brainwashes you for a decade.

You’re processing the information in the incorrect way bc of your single-mindedness. (Not applying Dispensation nor double application for prophecy).

But this is also why people get caught up in wrong doctrine.

This is why people don’t know much Bible.

This is why people, for example, apply verses wrongly in Revelation 2-3 and think Christians can lose their salvation.

This is why hyper-dispensationalists, for example, think Revelation 2-3 is only to Tribulation Saints and not to Christians.

When God is speaking in terms of Prophecy, he is referring to two-different timelines (present / timeline #1 + future / timeline #2), while addressing only ONE group

This is also why people don’t understand the General Epistles.

In the General Epistles, the book of “Hebrews to Jude”, people get confused as well,

The hyper-dispensationalists think “this is to tribulation saints only!!!“

and then you have anti-dispensationalists that think “this is to the churches only!!!“

You gotta realize in Hebrews through Jude, those books contain “Prophetic” statements, which have double application.

If you disagree, then you need to study and read the Bible better.

Hebrews through Jude make mentions of:

–the anti-christ
–end times in the latter days
–false prophetsThis is all stuff for the FUTURE. You can’t escape any of that.

In Hebrews through Jude,

It’s speaking to ONE group but addressing TWO DIFFERENT timelines.

Psalms 22:1; “My God, My God why have you forsaken me” David speaking, but also refers to Jesus speaking on the cross in the future. Two timelines/application. Even though it looks like one person

Verse 18; they divide my clothes among them and cast lots for my garment” Two timelines/application. Even though it looks like one person

As you can see, Psalms is also a Book of Prophecy.

2 Samuel 7:14; “I will be his father, he will be my son.” This is God talking about Solomon, but also a future reference to Jesus (as evident in Hebrews 1:5)Finally, Let’s go back to our friend Daniel 11,

Daniel 11:5– this prophecy was fulfilled in the latter BC of Syria (North, Antiochus) and Egypt (South, Ptolemy). This is timeline #1Now lets continue, look at Daniel 11:25 (timeline #2);

25 And he shall stir up his power and his courage against the king of the south with a great army; and the king of the south shall be stirred up to battle with a very great and mighty army; but he shall not stand: for they shall forecast devices against him.This is NOT referring to Antiochus vs Ptolemy (the latter BC kings or timeline #1)

This is TRIBULATION (FUTURE timeline #2).

21 And in his estate shall stand up a vile person, to whom they shall not give the honour of the kingdom: but he shall come in peaceably, and obtain the kingdom by flatteries. 22 And with the arms of a flood shall they be overflown from before him, and shall be broken; yea, also the prince of the covenant. 23 And after the league made with him he shall work deceitfully: for he shall come up, and shall become strong with a small people.Even more Verse 38;

38 But in his estate shall he honour the God of forces: and a god whom his fathers knew not shall he honour with gold, and silver, and with precious stones, and pleasant things.Again, one group of people, two applications/ time periods. (Latter BC Kings and Tribulation Anti-Christ)